“You’d be amazed at how much Warren reads – at how much I read. My children laugh at me. They think I’m a book with a couple of legs sticking out.” – Charlie Munger 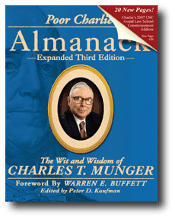 Charlie Munger is best known as the Vice Chairman at Berkshire Hathaway.

Unlike his partner Warren Buffett, he wasn’t mentored by a Benjamin Graham type at a young age.

Munger developed his skill level as an investor on his own.

As Munger has said,

“I met the towering intellectuals in books, not in the classroom, which is natural. I can’t remember when I first read Ben Franklin. I had Thomas Jefferson over my bed at seven or eight. My family was into all that stuff, getting ahead through discipline, knowledge, and self-control.”

If you’re looking for a reading list to dig through, Charlie Munger’s ranks at the top.

In the appendix of Poor Charlie’s Almanac, there’s a list of 20 books that Munger recommends.

His reading list covers a broad range of topics.

Charlie believes it’s his wide range of knowledge, that gives him an edge.

As Munger has said about him and Buffett

“We read a lot.  I don’t know anyone who’s wise who doesn’t read a lot.  But that’s not enough: You have to have a temperament to grab ideas and do sensible things.  Most people don’t grab the right ideas or don’t know what to do with them.”

Here are the 20 books listed in the appendix.

Books about Charlie Munger Worth Reading

Each year at the Berkshire Hathaway annual meeting, a reading list is compiled of Warren and Charlie’s favorite books.

The books are sold at the conference by the local bookseller The Bookwarm.

Of course, a true Charlie Munger reading list can’t be complete without the book: Seeking Wisdom: From Darwin to Munger. The book, which is also on the Berkshire Hathaway reading list, is a must-read for Munger enthusiasts.